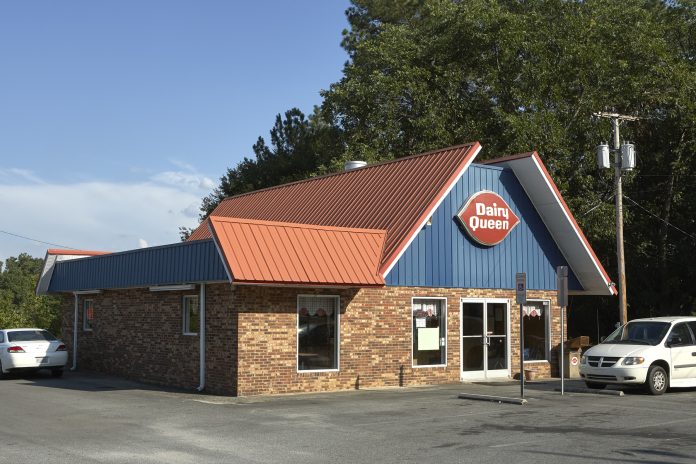 It happened one day a few weeks ago. I woke up one Sunday morning to the news that my beloved Dairy Queen® (DQ®) in Dallas was closing. The iconic fast food chain that has been serving up soft serve ice cream and other tasty treats for almost 50 years was calling it quits.

Reading it was one thing. Seeing it was another. So I took a quick drive up the road to see it with my own two eyes. When I arrived, I couldn’t miss it. In a place that’s been frozen in time since it opened, this was brand new. Taped to the front window was a bright neon green poster board with the following words:

We want to thank you for nearly 50 years for being dedicated customers. A big thanks to you for always supporting us. Unfortunately we will be closing September 29 due to landlords not renewing our lease. We will miss you all dearly! We love you all.

In a town where they seem to find a way to build yet another shiny new thingee, (you name it – another fast food restaurant, another pharmacy or another auto parts store), the Dallas DQ was an institution. This particular DQ was special. It was independently owned, independently operated and independently independent. Some might even say stubborn. But in the end, that’s why I loved it.

The building itself was far from shiny and new. The promotional posters that hung on the wall were old and faded and even outdated. You could tell the restaurant hasn’t changed too much since it first opened its doors back in 1971. But that’s the best part. It didn’t have to, as long as the quality of the food didn’t change.

It served the standard fare you’d come to expect from a Dairy Queen, especially their patented soft serve ice cream. There were other DQ favorites too, including Dilly® Bars, Dipped Cones and my personal favorite, the Blizzard®.

They also served up hot dogs and hamburgers and other local favorites like their Carolina barbecue sandwiches. They were a Dairy Queen, just without all the rules and regulations and restrictions that the modern DQ’s have to abide by.

And there’s one thing you better have on you when you walked through those double glass doors – you better have cash. Don’t even try to pay with a credit card or even an official DQ gift card here. They are not allowed in this Dairy Queen. Just the way it was in 1993.

Ironically, that was also the same year that Midway Games released the arcade game version of NBA Jam. When I first started going to the Dallas DQ in the early 2000’s, this was the only arcade game in the place. It sat prominently in the corner of the dining area for all the patrons to see. I even played it a few times, for old times’ sake. I wasn’t very good, but that didn’t matter. It made me feel good to play it. As long I stayed in this particular Dairy Queen, the Charlotte Hornets never left town.

The Dallas Dairy Queen closing is just another reminder that things don’t last forever. Summer only lasts a season. Kids grow up. And the Hornets eventually skipped town for New Orleans.

Just because it was here yesterday and today, doesn’t mean we are guaranteed tomorrow. And unfortunately our tomorrow has come. September 29 was their last day.

They say nature abhors a vacuum, so surely another ice cream establishment will eventually open up and will win over our hearts and minds and our taste buds. But I’ll still miss the Dallas Dairy Queen, especially on those hot summer Sunday nights. It was the perfect way to cap off a long summer weekend. A Reese’s® Peanut Butter Cup® Blizzard is, and always will be, the best way to make your summer Sundays last just a little bit longer.

The reality of life is that ice cream parlors eventually close and go away. But the ice cream never does. You can always have ice cream. Anytime and anywhere. On a good day or a bad day. Whether you win or lose.

That’s the best part of all. Ice cream doesn’t care how much money you make or what kind of car you drive.

It’s been put here for a reason. I think maybe it’s a gift from God. Ice cream is the Good Lord’s way of saying “don’t worry, everything is going to be okay”.