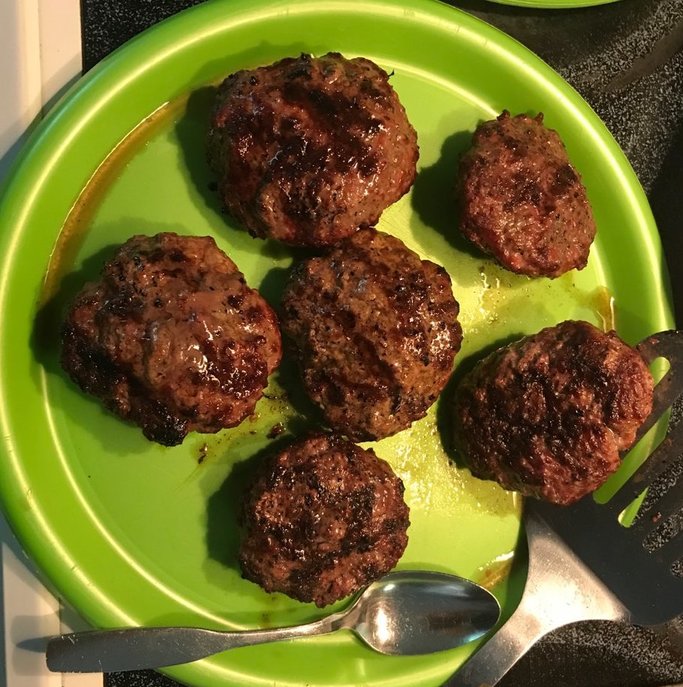 The fact that National Burger Month and Mother’s Day share the same month is purely a
coincidence. If it were up to my Mom, the month of May would also be National Salmon Month.

That may be her favorite entree. But salmon doesn’t quite have the same broad appeal that burgers do – unless you happen to be hanging out with a family of brown bears along the Brooks River Falls in Katmai National Park in Alaska.

Unfortunately, salmon is only given the celebratory treatment one day out of the year. National Salmon Day was somehow assigned to October 8 while the All-American burger gets all 31 days of May.

When it comes to Mother’s Day, my Dad has less of a chance messing up a good burger meal than a salmon meal. Or so we thought.

That’s what Mother’s Day is all about – unskilled party planning dads (and their kids) do their best to celebrate and lift up the moms of the world on their special day. One way this is done is by preparing and serving a great meal for her.

But let’s not get overly ambitious. A good rule of thumb is to stick with what you know.  And let’s face it – most dad’s know grills. What they probably don’t know much about is braising, simmering or stewing. In an effort to keep things simple, you can never go wrong with a tasty burger. They are always satisfying.

Last year my girlfriend and I got together with my parents for a Mother’s Day lunch. My Dad took charge of the meal that day. Back when my sister lived in town, she usually helped him out on days like these. This time he was left to his own devices, so he made what we thought was the right call and decided we were going to have burgers.

He took the ground beef and pattied them up. He fired up the grill and placed the beef patties over the flames. After about 15 minutes or so on the grill, he returned to the kitchen with what could only be described as a case of “honey, I shrunk the burgers”.

When dads are in charge, a Mother’s Day lunch has a way of turning hamburgers into burger nuggets.

You couldn’t even place these mini burgers into a slider bun without asking yourself, “where’s the beef”?

Burger King may be the Home of the Whopper, but at my parents house, they are thinking of adding the tagline, “Home of the Burger Nugget” to their mailbox.

This is what happens when my Dad is in charge of dinner. He wasn’t in charge that often in my course of growing up, but when he was, it usually meant my Mom was out for the night attending a school PTA meeting. Dinner usually consisted of beanie weenies, straight from the can, reheated and served.

Dinners were never fancy when my Dad was in charge. And they still aren’t. But he can claim to have created the 8th Wonder of the World we now know as the Burger Nugget.

That’s what Mother’s Day looks like at our house. Amateurs come out of the woodwork and try to assemble something that looks like a celebratory meal. We try to imitate, but can’t quite duplicate, the way my Mom pulls it off.

But we still do our best. We make the effort because of how much we appreciate her and all things she’s done for us over the years.

Mother’s Day is our chance for us to show the moms of the world we care and appreciate all that they do. It’s also an opportunity to remind them that they will always have job security, as long as we are in charge.

No one quite does it better than they do. They seem to make things just right. Especially the burgers.