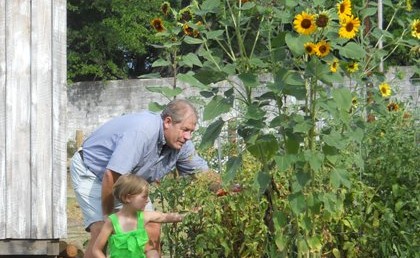 Coming up with a great idea isn’t that hard to do. Many of us come up with great ideas on a daily basis. It’s the implementation process of those great ideas that is actually the hard part. That’s the reason I’m amazed and fascinated at the number of community gardens our county now boasts. Two years ago, there wasn’t a single community garden to speak of. And now there are five.

Community gardens have always been around in some form or fashion, but it seems as of late, more communities are getting together to make it a reality.

But like anything, a community garden may sound like a great concept in theory. However, just like any plant, it needs the right conditions to not only grow, but to thrive. There a lot of pieces that need to come together simultaneously to make a community garden a reality. That includes an actual place to garden, an organization with great leadership, and of course, a devoted core of passionate volunteers.

Those are just the basics. Without those, a community garden doesn’t have much of a chance to succeed. That’s why it’s amazing to see many of the community gardens thriving in our area. And what’s even more amazing about it all, is that they each have their own distinct personality.

This garden is now into its second growing season. The idea for this garden came to light after Jonathan Taylor and Tyler Jones were sharing some conversation over a couple beers. They soon took to Facebook to gauge interest for the idea, and the response was overwhelming.

Sixteen months later, the garden has 47 garden plots for lease with a strong emphasis on organic gardening. Taylor is amazed at how involved the parents of both Page and Belmont Central Elementary students have been in making their garden a great learning resource for kids in Belmont.

Sometimes you get an idea or thought in your head and you just can’t shake it. That’s how Dr. Will Current describes how the Gastonia Rotary Garden came to be. After years of driving by a vacant lot between Avon and Broad streets on East Franklin Blvd. in Gastonia, Current kept coming back to one idea – a community garden.

Current, a member of the Rotary Club of Gastonia, decided to approach his rotary club with the idea of taking this up as a service project.

And take it up they did. Now in their second growing season, they currently have 43 garden plots managed by various community groups. However, what makes this garden different from the rest, is that all the produce harvested goes directly to organizations in our community that feed the hungry.

Of the three profiled for this story, this is the youngest of the gardens. The Mount Holly Community Garden, which operates under the Mount Holly Farmers Market non-profit status, broke ground in February of this year. With 52 garden plots available, it’s hard to believe the amount of progress they have made in such a short period of time.

According to Melanie Black, a board member with the Mount Holly Farmers Market, everything just fell into place like it was meant to be. They found the perfect lot (owned by First United Methodist Church), a great church to partner with, and were blessed to have a passionate and supportive Farmers Market board. She was amazed at how much energy and support this garden had from the very beginning.

However, it’s clear to see that in each of these instances, a simple idea about a garden has blossomed and grown into something that all of these organizations and groups could have never imagined. I think it’s fair to say that the amount of community excitement and support has blown them away.

So maybe it’s true. If you build it, they will come. And don’t let your black thumb keep you away. After all, as Melanie Black told me, “it’s only 10% gardening. It’s 90% community”.

—
For more information about all of the community gardens in Gaston County and how you can get involved, visit www.gastoncommunitygardens.com.

Welcome Fall To Your Front Door

Santa and the Little One