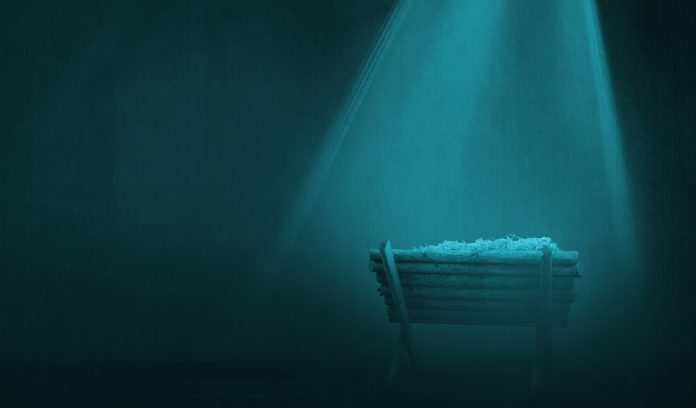 Christmas Eve had fallen upon the Carolinas in the usual way. The McAdenville lights were still aglow and full of wonder despite holiday travelers having long since departed. Businesses were closed throughout the county and the frosty night air stood still, as if waiting for that someone special. For anyone and everyone knew that Santa Claus would soon be on his way. There was something, however, that they didn’t know…something was weighing heavily on Santa’s heart this year. Yes, Santa gets troubled like you and I do sometimes.
Santa had just passed through the northeast part of the United States. He started there because in doing that he could zig-zag through each time zone until he reached California and remain in the same hour of the night. It was the same as usual at each stop: into the residence, have a cookie, and leave the presents. He began noticing however, that the children were numerous demanding bigger and better toys each year and not only that, but the toys he had left from the year before had been practically demolished and abused. There were shiny ribbons, beautiful garlands, and extravagant bows on boxes in piles around the tree in most of the houses he stopped in. It almost seemed as though people just bought things in excess just to have them. He hoped that things would be better as he ventured down south, but there didn’t seem to be an end in sight. What good was jolly old Saint Nick if people just bought everything they wanted? It’s not like they were going to really care for what he was leaving them anyway.
Santa decided he needed to take a break to clear his head. He flew the sleigh down into a wooded area where it would be hidden from anyone passing by, and made a quick change out of his Santa suit and into regular clothing. Walking out of the woods, he found himself amid the lights in downtown McAdenville.
He stopped in front of the nativity scene on display and began to look at the baby Jesus, when he was startled by a voice behind him.. “It’s amazing what the power of such a small gift can do to such a big world, isn’t it?”. Santa turned around to find what appeared to be a homeless man with a beard, dirty gray hair, dressed in stained denim, smiling back at him peacefully. After a moment Santa answered, “It certainly is.”
“You know, that little baby never asked for any of this,” said the man while pointing at Jesus. “He was born into this world like you and me, yet we are free because he was born.” Santa stared at the face of the little baby for awhile as the man kept speaking. “He knew what it was like to feel neglected. It seems like every year around this time we get further and further away from the true meaning of Christmas. It’s easy to do- between the television ads, the music after Halloween, and the big push to buy everything for the perfect holiday meal or gift. The stuff gets better, and people constantly upgrade to the latest and greatest without ever taking time to remain content for even a moment. I know why you stopped here tonight and that you feel lost for the first time in a long time, but I promise you that it’s alright. Even when he grew up, that little one there would question God, but he never lost faith. We all have a purpose Kris. Just hold tight to your faith and keep looking to Him for the answers.”
Santa realized that they had never introduced themselves, and he also wanted to ask the man how he knew it was him without his traditional red hat and suit on. But as he turned around he found himself alone with nothing but the sparkle of the McAdenville lights, and scent of frankincense in the air. With a renewed heart and after a few deep breaths, Santa smiled to himself. “Merry Christmas my friend,” he said as he began to return to his sleigh. The night had just begun, and he was excited to share the gift he had received with the rest of the world.

Cooking With The Glenn’s-Brunch Waffle’s

9 Gaston County Pools To Get Your Splash On!