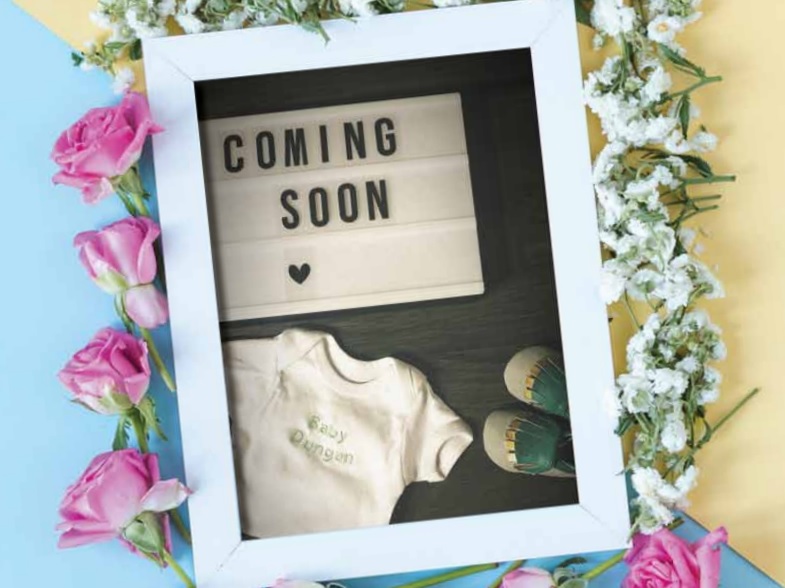 My son, Evan, seems to know when one of my jokes are coming. He can sense the approach. He can spot the set-up a mile away. He knows the punchline isn’t far behind either. It never fails. He just knows.

And there’s no reason he shouldn’t know by now – he’s only known me and my sense of humor for the last 15 years. He oftentimes knows where my joke-minded brain is going to go even before I do.

Except for a few weeks ago. We were stopping just outside of Asheville where he lives to grab some lunch. I had decided this was going to be the day I told him my big news.

After we placed our lunch order, it was the time to share the news with him.

“So, there’s something I want to tell you”, I said. “It’s not bad, but it is something that will impact you and me and all of us.”

At this point, he sees the approach. Now he’s getting ready for the set-up.

“I just wanted you to know that [my girlfriend] Jillian is pregnant, and we’re expecting a baby this fall.”

He just sits there. And waits. And then he waits some more. Then he says, “I’m waiting for the punchline.”

Clearly, I’ve trained him well. He knows a punchline is always lurking around the corner, except this time, there was no punchline to be found. This was no joke. For once, I was being serious – a baby was on the way, and he was going to be a big brother.

I’m sure I caught him off guard. An announcement like that would catch anyone off guard. But he seemed fine. He seemed genuinely happy for me and for Jillian. I even got the impression that the idea of him being a big brother sounded pretty good too.

And then I hit him with the punchline.

“And if it’s a girl, we’ve decided on naming her Betty Hemby Dungan.”

He broke into a smile. I got him with a baby name he knew I’d never use, just to get a laugh out of him. He didn’t see it coming – the punchline or the baby news. That’s how life can be sometimes.

I didn’t see it coming either, but I’ve had a little more time to process little Baby Dungan. I’ve also had a lot of time to think about baby names – the ones we’d like to use and the ones that Jillian would never let me use in a million years. The banned baby name list seems to amuse me most of all.

They come to me from all places. Some jump out at me from a song (“Jimmy McGrew Dungan”), while others come from a movie (“Eugene Jerome Dungan”). Some just appear out of thin air (“Little Debbie Dungan”) while others reveal themselves in a dream (“Betty Hemby Dungan”).

The moment one pops into my brain, I instantly relay it to Jillian in hopes of garnering some sort of reaction. Most of the times she knows I’m joking, but sometimes she’s not even sure.

That’s how my brain works – I’m always looking for a way to get a laugh out of life.

It’s all new to me because I didn’t do any of this with Evan. When I met his mother, he was only 10-months old. I missed everything up to that point.

That means new and exciting days are ahead. It also means tired days are ahead too. This baby stuff is uncharted territory for me. So I look at it like I look at most things – with a grounded sense of reality yet not afraid to inject a little humor and laughter along the way. That helps to keep life from getting overwhelming.

I still don’t know why the name Betty Hemby came to me in a dream, but I love it. Especially when I think about her getting in trouble and me having to raise my voice and say her full name in a stern tone. This is kind of stuff that makes me laugh.

I’m sure the banned baby name list will continue to grow. More jokes will be cracked. This is how I am. There’s always a punchline lurking in the distance.

That’s why I’m putting Big Brother Evan in charge of helping his new little sibling to navigate this new world of bad dad jokes and eye-rolling punchlines. And to help explain how thankful Little Baby Dungan should be for not becoming a Little Betty Hemby Dungan.

Where to Eat in Gaston County, By the Meal