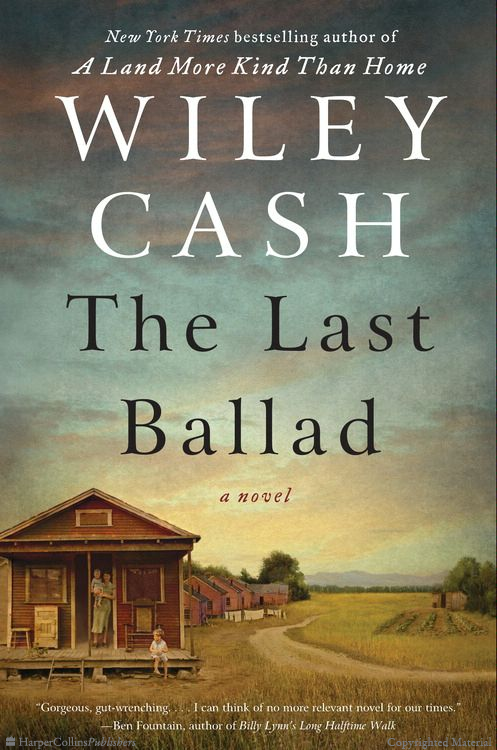 Wiley Cash, author of The Last Ballad tells the story of a Gaston County labor movement that took place 89 years ago in 1929, and one of its leaders – a young local woman named Ella Mae Wiggins. Although many of the characters and locations are real, this is a fictionalized account of those long ago events. Ella Mae (sometimes mis-spelled as Ella May) lived and worked in Bessemer City, just a few miles Northwest of Gastonia. She worked as a spinner six days a week, twelve hours each day, for around $9 a week.

The textile industry came to Gaston County starting in the 19th century because of cheap labor and the proximity to the raw material of cotton. Rivers and creeks provided a source of power even before the days of electricity. Wealthy men and banks provided the capital to construct the factories and purchase equipment. There was money to be made in textiles and enterprising capitalists emerged who were willing to venture their wealth for the opportunity of economic gain.

People left their farms seeking a better way of life and came to work in the mills. Indeed progress came. When the mills were electrified, so were the village houses.

Ella Mae struggled to make ends meet. She had four young children and her husband Charlie had deserted the family. She rented a cheap house without heat, electricity, or indoor plumbing in the former Stumptown neighborhood in Bessemer City. She walked to work. When her children got sick she couldn’t take off work because she might lose her job.

When she heard union organizers were in Gastonia to sign up workers into a union Ella Mae went to see what it was all about. It didn’t matter to her that some of the New York organizers were associated with the Communist Party. In her desperate situation she needed help from wherever it might come.

Word spread through the communities that a worker strike was being called for April 1, 1929. Some workers were supportive and willing participants. Of course some opposed the strike and some were willing to sit on the fence and not take sides. North Carolina Governor O. Max Gardner called out the National Guard to suppress the strike and preserve order.

Ella Mae was swept into the events in Gastonia. She found herself on stage speaking about her conditions. She wrote and sang songs about the plight of exploited workers such as herself.

Wiley Cash tells of the clash that occurred and helps us understand the potential for violence that a worker union strike held in Gastonia might elicit.

One of the central figures in Cash’s telling is Sheriff Orville Aderholt. By all accounts Sheriff Aderholt was recognized as a “fair man” by the factions. In June at age 54 Sheriff Aderholt was shot and killed during on-going anti-union violence. Seven men were convicted of second degree murder in connection with Chief Aderholt’s death. Four of them were sentenced to 20 years in prison. No weapon was ever found and it is possible he was shot accidentally by anti-union citizens as they attacked the union camp in Gastonia.

Ella Mae Wiggins continued to participate in organized protests. Later in September 1929, riding in the back of a stake-bed truck heading from Bessemer City to Gastonia to another union event, she and others were attacked by armed citizens. Ella Mae age 30 was shot and killed. Despite many witnesses, no one was convicted of her murder.

Recently I mentioned this book to a friend who spent his career working in the news business. He told me that in his travels in Eastern Europe he was surprised when people knew about Gastonia and the failed attempt in 1929 to establish workers unions there.

I recommend this book to readers for the following reasons: It has local interest with familiar names and places. You can drive to locations mentioned in the book and walk around to get a sense of place for the events that unfolded. Secondly, it has a female acting in a leadership role in an important social movement. And lastly, it is a compelling story of the struggle for social justice.