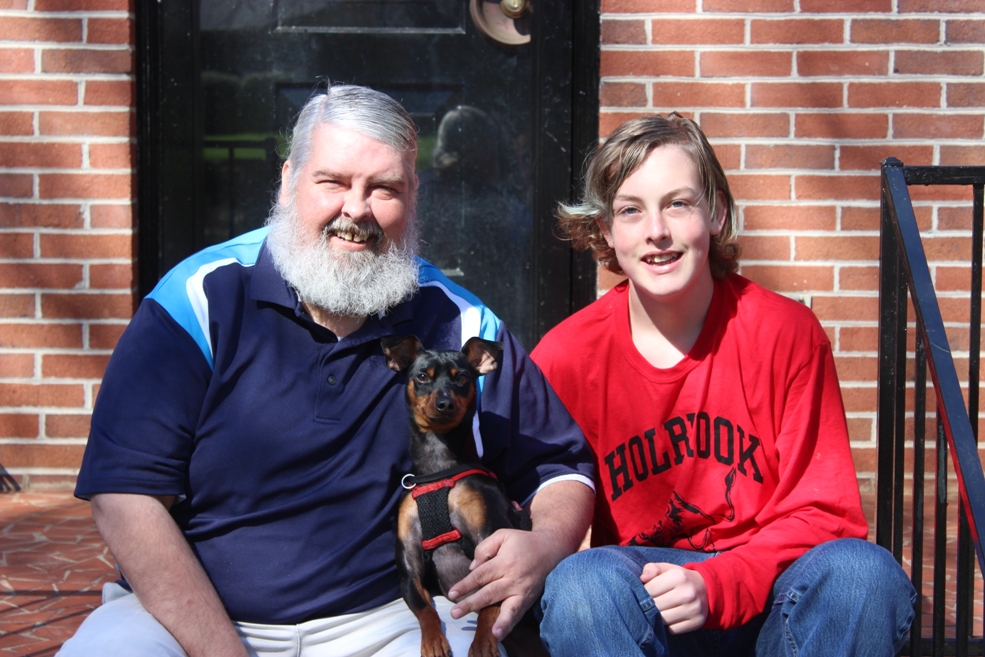 The story of Adam Rhyne, aka “The Big Man”, is ultimately one of hope, passion and determination. But it wasn’t always that way.

Adam was riding high ten years ago, like so many in the housing industry. Some may say he was living the dream. He was working in construction, building marble and granite fireplaces.

The money was good. Life was good. That is, until the bottom fell out, thanks to the subprime mortgage crisis in late 2007.

It wouldn’t take long for Adam, and many others in that industry, to find themselves on the unemployment line through no fault of their own.

Hindsight is a funny thing. Today we know how bad the subprime mortgage crisis actually was. In 2008, we didn’t know how bad it would be or how long it would last. Adam probably thought he’d be back to work in a few weeks or months. Those few weeks and months, turned into two years.

Sounds like an easy choice to me. Adam decided to enrolled in the Broadcasting Production Technology program at Gaston College in 2010.

Adam was good at construction, but he had always had a passion for videography. The question was – would he be able to develop the skills to do this?

You see, Adam has a thing called ‘grit’ – a character trait that Angela Duckworth, a professor in psychology at the University of Pennsylvania, describes as the combination of passion and perseverance to achieve longterm goals.

After two years of being unemployed, you can understand that Adam’s confidence probably
wasn’t where it should have been. But he kept showing up – listening and learning.

And then one day it all clicked. Adam produced two “Big Man Around Town” videos for a class project. These two videos were created much in the style of Guy Fieri’s show Diners, Drive-Ins and Dives.

But this is when it all came together for Adam. This is moment when he knew he could do this. The creative vision in his head could be translated onto the screen.

Adam would eventually go on to secure an internship at WCCB-TV in Charlotte helping out
with their morning show “News Rising”. His goal was to be so good that at the end of his
internship they wouldn’t want him to leave.

And that’s how it worked for Adam. He was offered a part-time job as a Production Assistant. Just last year, he was promoted full-time as Director/Master Control Operator. But that’s not all. Adam continued to challenge himself and decided to take a freelance videographer position with the Charlotte Knights baseball team last summer. He even had one of his video shots take the #4 spot on ESPN’s Sportscenter Top 10 Plays of the Day list last summer.

Adam is checking off his professional goals little by little. But it’s bigger than that for him. It’s about being a positive role model for his son.

Adam’s son, Ethan, was just a toddler when things got tough ten years ago. Today he’s in middle school. But over the years, I’m sure Ethan has seen how just hard his dad has worked to achieve his goals.

‘Don’t listen to what people say, watch what they do’. I love that quote because it’s so true. Actions always speak louder than words.

If Adam keeps it up, he’ll amass quite the portfolio of videos for his son to watch. He’ll leave a legacy that will last a lifetime.

And then one day Ethan can say, “Hey, do you know The Big Man? That’s my Dad.”