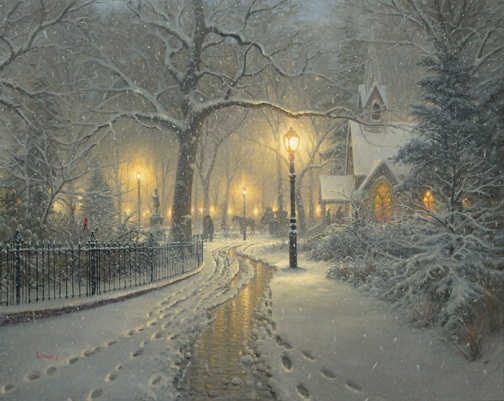 The Christmastown Thomas Kinkade Signature Gallery had reached a crossroads with the loss of Thomas Kinkade in 2012. But owner Jay McCosh is adding three new artists to his gallery in McAdenville. Gaston Alive spent some time recently with Jay to find out more.

GA: First, what’s up with your Thomas Kinkade pieces?

Jay: Since Thom passed away in April 2012, most of his galleries have seen some changes. His work is still in high demand worldwide and since he has passed his paintings are selling out more quickly. Thom left over 100 paintings that he had yet to release. Some of those have since been released. His nephew Zac Kinkade is picking up where his uncle left off and has had his first painting, Noah’s Ark published in very low numbers, which make it collectible and rare.

GA: We were excited to hear that you are adding new artists….

Jay: I have been approached over the years by several artists wanting us to carry their art. I had to be very careful however as I wanted art that would complement Thom’s incredible body of work; something our collectors would get excited about as well as attract new collectors. I found that and more in Robert Finale, Mark Keathley and Abraham Hunter.

GA: How would you compare the work of Thomas Kinkade and your new artists?

Jay: On some paintings many people will see many similarities, but others are very different as there are any subjects Thom never painted. The color palettes are also different. Abraham is very detailed in everything he does, even to the individual details on the leaf of a tree. Thom’s palette in his early pieces was much softer than in later years and both Mark and Abraham have very vivid color palettes, whereas Robert Finale’s is in between the soft and vivid.

GA: What is the demand and collect-ability of work by Keathley, Hunter, and Finale?

Jay: The three new artists have much lower edition sizes than we are used to with Kinkade. We have had Robert Finale in the gallery now a little over a year now and have had the embarrassing experience happen a few times where a customer will come in and really fall in love with a painting and need to go home and measure or wait until next month, only to find that because of such rarity in these paintings not only is the painting sold from here but also completely sold out nationwide. I fully expect the same kind of demand from Mark Keathley and Abraham Hunter as well.

GA: So do you have work by Hunter and Keathley in the gallery?

Jay: Yes we have quite a nice selection of all three new artists work here in the gallery as well as an original painted by Abraham Hunter that he painted in Pigeon Forge.

GA: How does the cost of paintings compare to Kinkade?

Jay: Mark and Abraham’s Standard Numbered (S/N) 18”x24” framed paintings are only $750 as compared to $995 both Thomas Kinkade and Robert Finale.