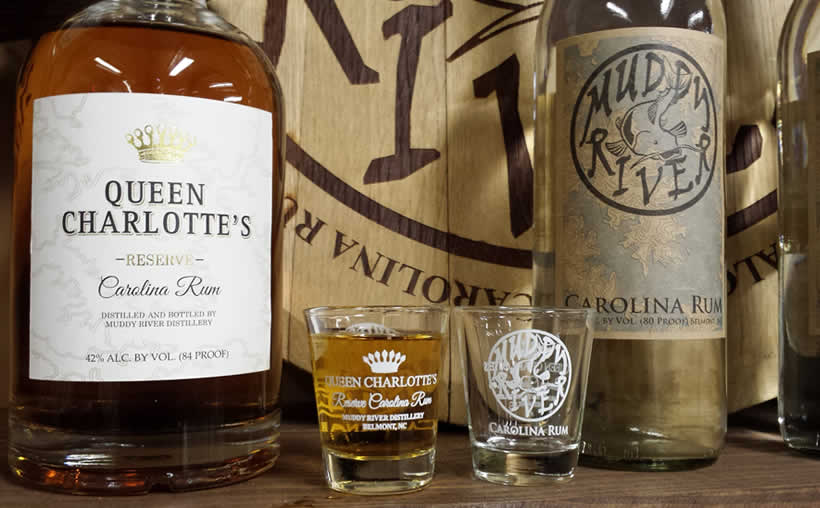 Did you know there is a rum distillery in Belmont? Muddy River Distillery is located in the old Spectrum Dyeing Mill on the banks of the Catawba River. Robbie and Caroline Delaney started the company in 2011 and were the first rum distillery in NC and fifth legal distillery in the state. Each bottle of the company’s rum is distilled, aged, and bottled in house. Muddy River produces Carolina Rum, which is an award-winning, smooth, silver rum, and Queen Charlotte’s Reserve, which is aged in new charred American white oak barrels. Both products are available in local ABC stores and restaurants, and throughout the state.

Robbie, a former construction worker who grew up on a farm in Wake Forest, got the idea to start the company after reading an article on craft distilling. He researched and learned how to distill, and designed and built Muddy River’s three reflux column stills. “Everyone thought I was crazy,” he says. “Now we have grown from 500 sq. ft. to 6,100 sq. ft. We needed more space for aging barrels.” Queen Charlotte’s Reserve is aged at least eight months and has sold out three times. “We just didn’t know what to expect in the beginning or how much demand there would be.” Bourbon and scotch drinkers tend to enjoy Queen Charlotte’s Reserve because of its mellow, oaky finish.

Caroline, who is a Gastonia native, runs the sales, marketing and accounting. “Our friends and family are very supportive – they come in and assist us with bottling, which is a huge help,” she adds. “It’s hard work and long hours, just like any other small business.”

Muddy River won Best Spirits in 2012 and 2013 at The Big Sip drink expo in Greensboro, and also beat many breweries and wineries for Best Overall in 2013. In October 2013, Creative Loafing Charlotte awarded them “Best Locally Made Spirits.”

Muddy River Distillery’s Carolina Rum and Queen Charlotte’s Reserve are available in ABC stores. Tell your friends about this local business! See pictures, get drink recipes, and find out more about the distillery from the website: www.muddyriverdistillery.com. Distillery tours are available by signing up on the website’s “Take a Tour” page. One Room at a Time