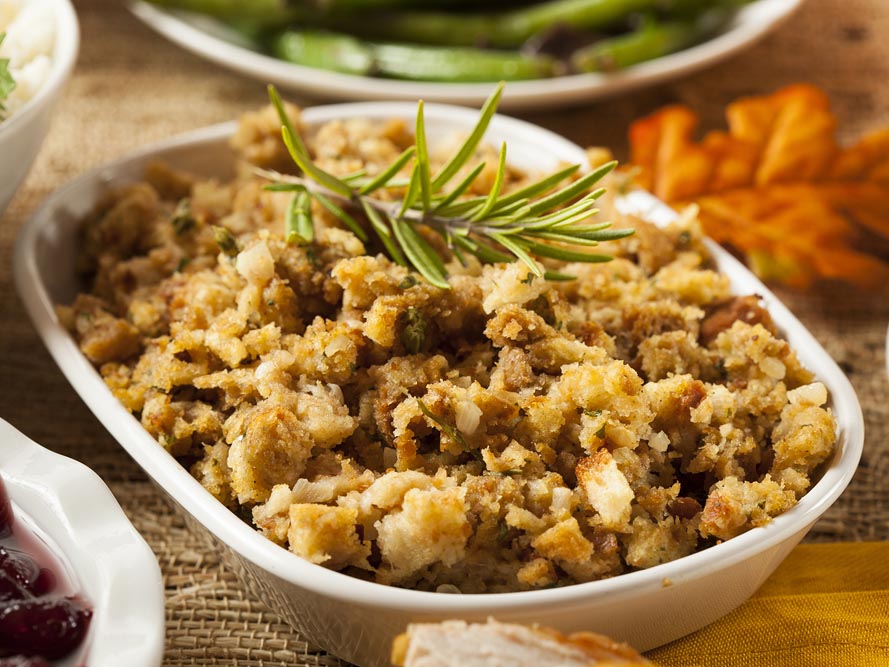 Is it Stuffing or Dressing, are they the same or not, do ingredients make the difference? Well, after extensive research and historical study I have an answer, and of course my ‘Stuffing’ recipe.
From a culinary side The Joy of Cooking, one of the iconic reference cook books ever published, says the difference is Stuffing is placed inside the object (bird, pork chop, fish, etc.) and dressing is cooked on the side and the dictionary terminology established in 1538 it seems to support this view.
The National Turkey Federation won’t take a side, and states the terms are interchangeable. I understand in Canada Dressing contains no meat but Stuffing usually has it included. Some feel Stuffing is more moist while Dressing can have a crispier texture, but one thing is for sure, if you do ‘Stuff’ be sure to do it right before you cook and that it reaches at least 165 degrees in temperature (or take it out of the fowl and give it a bit more cooking while the turkey rests prior to carving).
Looking at it from a current usage point of view it seems to be a North / South thing. In the North, above the Mason Dixon Line, the white bread based side dish served at Thanksgiving is ‘Stuffing’ and here in the South the cornbread or rice based dish is ‘Dressing’. From an ingredient point of view it seems the origin of the dish was what was available, which is how you end up with Oysters being included along the Coast and in Louisiana things like Andouille or chicken livers and rice.
Most recipes include bread (white, rye, biscuits, crackers, corn, etc.), some vegetables, seasoning and something to moisten the mixture. The exact measurements really depend on your tastes.
My recipe, taught to me by my mom and that I have tweaked is:
Diced Onions and Celery sautéed in butter
1 part spicy sausage 1 part sage sausage cooked and crumbled (save drippings to add later) or as a variation try minced Country Ham
Chicken stock (If you really want to get into this make your own)
Bread Cube and Crumb (I save my extra and cut it into cubes then dry it so I end up with a mixture of breads)
Fresh sage (Chopped) you could use poultry seasoning
Chestnuts chopped and toasted (replace these with oysters or chicken livers)
Combine all ingredients and season to taste with salt and pepper. I like mine moist but it has to retain the texture not become a mush, so the amount of butter and chicken stock may vary. Cook covered in a casserole then uncover in the last 20 minutes to crisp up the top. This provides the texture without drying the overall dish out.
In the end, North, South, East or West where you grew up has more to do with dressing vs. stuffing and every families traditional recipes are the bedrock when we gather to celebrate and give thanks for our blessings.
Each year in my house we work to find a balance between the tradition and something new so we can make new traditions and keep the ones we all hold most precious.
Till next month, Happy Thanksgiving!