Between after-Christmas sales and the impending “Super Bowl Sunday,” January is a popular month for TV purchases.  And, as such, it would be my guess that it’s also a popular month for debates between husbands and wives over where the big-screen plasma television is going once it gets home.  While televisions of years past were pieces of furniture in themselves, the new trend of flat screens has opened up a lot of possibilities for including a TV in the room without it becoming the main attraction.  Although lots of furniture manufacturers offer the standard media cabinet, there are other ways to “disguise” or at least make the television fit in with your décor, hopefully making both husband and wife happy campers.
One of my favorite solutions is to use a pretty dresser under a flat screen TV, whether it’s mounted on the wall above or just sitting on top.  Look for a piece that you might not normally use in a living room.  For our family room, I used an older, more traditional dresser with carved detailing and painted it for a more modern look.  A dresser with lots of drawers provides great storage for DVD’s, remotes, toys, etc.  If you have unsightly media boxes that you don’t want sitting on top, it’s possible to take out a drawer (or two) and replace them with plywood panels. Once you have the TV in place, there’s often the dilemma of a big, blank wall around it, making the television feel even more prominent in the room.  An easy, and affordable, solution is to create a gallery of frames around the television.  Not only does this trick fill up a lot of space visually, but if done right, it can almost make the TV blend in with the rest of the wall display.  When hanging your art, treat the shape of the TV as a frame in itself.  I like to use artwork in subtle colors or black and white photography so that it’s not too distracting.  If you have a large wall to fill but not a huge budget, there are several free online sources for printable art, offering just about any subject you can imagine.  I often use Vintage Printable (http://vintageprintable.com/wordpress/) or the New York Public Library’s digital image gallery (http://digitalgallery.nypl.org/nypldigital/index.cfm).
Paint is another great solution.  Use a darker color on the wall behind the TV to make it appear less prominent.  In a media room or playroom, black chalkboard paint is a fun option, whether you use it on the entire wall or to just paint a large horizontal stripe.
And, I saved one of my favorite ideas for last.  If you have a flat screen TV mounted on the wall, one way to “pretty it up” is to frame it, literally.  Hang a pretty frame around it—a sleek style for a more modern look, or somethin g more ornate, if your tastes lean toward traditional.  If painted the same color as the wall, the frame (and the TV) almost becomes an architectural element in the room, and a pretty focal point that she won’t mind staring at while he’s watching football.

News From The Furniture Market 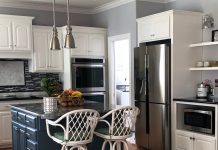 In The Garden With Cindy