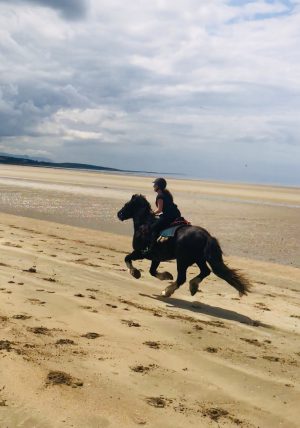 It’s funny how the universe works. Last summer we were in Denali, Alaska on a horseback ride discussing European riding adventures with the trail guide. She mentioned that Horse Holiday Farm in Ireland was the only place in all her travels that would let you take a horse, a map and ride, without a guide, from bed and breakfast to bed and breakfast. I happened to mention it to a friend at our stable back home, and a year later my daughter, Kate, and I landed in Dublin and drove west to begin a great Irish adventure. It’s a quick three hours across the country and we arrived in Cong, a quaint village where the The Quiet Man was filmed. We spent our jet lagged day exploring the ruins of the 7th century Royal Abbey, the Monk’s Fishing House and the ancient forest. After the requisite fish and chips at Pat Cohan’s Bar, we checked in to the Lodge at Ashford Castle which sits on a hilltop overlooking Lough Corrib, the largest lake in the Republic of Ireland.

We awakened early the next day to explore the grounds of Ashford Castle. The 800 year old Castle was a former home of the Guinness family, but is now a luxurious hotel. The drawbridge is attended by a guard in full livery and the only way to explore the expansive gardens and grounds is by being a guest or booking one of the castle’s activities. We had most of the day before meeting up with our friends from home, so we booked a private hawk walk at Ireland’s School of Falconry. Our guide, Mel, introduced us to Maya and Sahamran, two beautiful Harris Hawks. We walked out into the ancient forest with these gorgeous raptors perched on our gloved hands. Mel taught us to send them flying off and then call them back, with the enticement of raw meat, of course! It was a thrilling experience to have their wings brush our faces as they landed on our gloves. After saying goodbye to the hawks, we wandered back through the stunning gardens and stopped for a snack at Mrs. Tea’s Cottage beside the castle moat. We could have spent the whole day at the Castle, but our friends were due in on the afternoon train. So we drove a few hours north, past fields and charming villages, to meet our three friends in Sligo and then head to our bed and breakfast for the next two nights, Atlantic Haven.

The inn was nestled on a hill by the sea and run by a quintessentially Irish host welcomed us. We immediately pulled on our boots and ventured down the lane to the beach. From the shore, we could see Horse Holiday Farm, the riding stable, perched on the hill next to Atlantic Haven. Early the next morning we passed through the gates to meet Gerry, a local who has been working at the stable for 19 years. After a quick description of our riding experience, he assigned us each a horse for the trip. I’m paired with Alfred, a handsome Irish cob and Kate is given Barney, an Irish cob pony with a mischievous streak. We saddled our horses, reviewed the trail map with Gerry, and ventured out into the countryside. For the first day, our trail stayed around the stable to ensure the horse and rider pairings would be a good fit.

Last week was the horses mid-season break so they are fresh and lively as we trot past fields of sheep and cows. It seems most American visitors rarely make it farther up the west coast than Connemara, and it’s a shame because with the mountains and the sea, northwest Ireland is stunning. The Slieve League cliffs, the tallest in all of Europe, stand in the distance. The sun shone in blue skies and the clip clop of the horses hooves on pavement made beautiful music. Unfortunately for equestrians, Ireland is paving so many roads that used to be country lanes with money from the EU. Some side roads are still dirt, and we were able to have some good canters. We crossed into a cow pasture, much to the displeasure of the cows, and the trail led us over the dunes onto a deserted beach that could be a movie set. To the right, Classiebawn Castle crowned a cliff overlooking the sea and to the left were miles of deserted beach, perfect for a gallop. We considered taking the horses up to explore the castle, but there was no way to scale the cliffs on horseback. Instead we galloped along the hard sand at the water’s edge. The horses seemed to be enjoy the race as much as we did. On the walk back along the beach, one horse tried to lay down for a roll in the warm sand and another tried to take a swim, so we were laughing all the way back to the stable. There we tended our horses and were given saddle bags to pack with our gear for the trip. We had a delicious dinner at Harrison’s, a gastropub in Cliffoney just up the road.

In the morning Gerry drove us and the horses to the edge of the village of Belleek where we began our trek. There were regatta races in town so it was rather hectic, but within minutes we were on a quiet country road. Everywhere was postcard-worthy as we climbed the hills: emerald grass, blue skies, abundant wildflowers and endless fields bordered in charming stone walls, and sheep. So many sheep. We found a pub along the way with a spot to tie up the horses. The Donegal team was playing Gaelic football and the pub was crowded with rowdy, local fans in yellow and green. After giving the horses a drink, we headed into the pub for Guinness and Cokes and a break from the sun. After a few more hours of winding country roads, we arrived at Cavangarden House, a lovely Georgian mansion built in 1750 that sits on 380 working acres of farmland. We brushed and fed the horses and put them out with the cows, who were not thrilled with this arrangement. The innkeeper was lovely and arranged a taxi for us to go to town for dinner in Ballyshannon, one of the oldest towns in Ireland. With the sun shining the next morning, we tacked up and trotted for a few hours over country roads toward Rossnowlagh Beach, which is known for it’s surfing. We stopped at the Gaslight Inn on the cliffs for a cappuccino, taking in the beautiful scenery below us. The weather was gorgeous so the beach was quite crowded with families and surfers in their wetsuits. The horses were keen to race on the beach and once we passed all the crowds, we galloped along the sand for several kilometers before turning down a path into the forest and towards our next bed and breakfast. We followed paved roads for a few kilometers to Bayview Guest House which sat upon a hill nestled among fields of grazing cows and sheep. Our host had brought in the sheep for shearing, so we had a raucous audience watching while we hosed off the horses. We were ravenous after a long day of riding, so after cleaning up we taxied into Donegal Town. We found a delicious gastropub off the Diamond (the town square) called The House. Donegal is a cute tourist town on the bay and we walked around the Donegal Castle enjoying gelato while waiting for our taxi ride back. Back at the inn, we find we missed the shearing but go down to check on the horses and see the newly sheared ewes reunited with their lambs.

From the map, we thought we were going to be riding on the beach again, but instead it is low tide around the peat bogs. Our steady horses picked their way through the mudflats and slippery rocks like pros, but we were glad to leave the bogs after a few hours and head into the hills. We passed by a little cottage with an elderly man sitting in the doorway, taking in the sun. Like a real life Leprechaun, he happily greeted us and wished us well on our ride. Blessed with amazing weather again, there was not a cloud in sight. We climbed for hours higher into the remote mountains and stunning scenery. At the end of our long journey, our bed and breakfast host greeted us with carrots for the horses. It was a hard day of climbing for them, so they were delighted to roll off all traces of the saddle and graze for the night.

We woke up the next morning to drenching rain. After breakfast, Gerry arrived with the horse box to take us and the horses back to the stable and our car. At Horse Holiday Farm, we said goodbye to our wonderful horses, thankful they were such excellent guides. We began the drive east to the Wicklow Mountains which are just south of Dublin. A popular film set, the mountains are stunning in their beauty. We drove through a bit of the National Park and intended to make the hike up to Glendalough, the 6th century Monastic settlement, but dark had already fallen when we left dinner at the delicious Wicklow Heather. More reason to come back. Our last full day in Ireland we spent in Dublin. We checked in to the Westin downtown which felt a little like checking into Ashford Castle after so many days of hard riding. The sun was shining as we wandered through crowds of tourists in Temple Bar but it felt rather jarring after being in the remote country for so many days. We visited the architectural marvel of a library at Trinity College and peered at the Book of Kells, Dublin’s most famous artifact from the Middle Ages. But I think we all missed the horses and the open countryside. It was raining early the next morning when we headed to the airport to catch our flights home. Somehow that seemed appropriate.

Kids + Horses – A Recipe For Healing

Make It Your Own