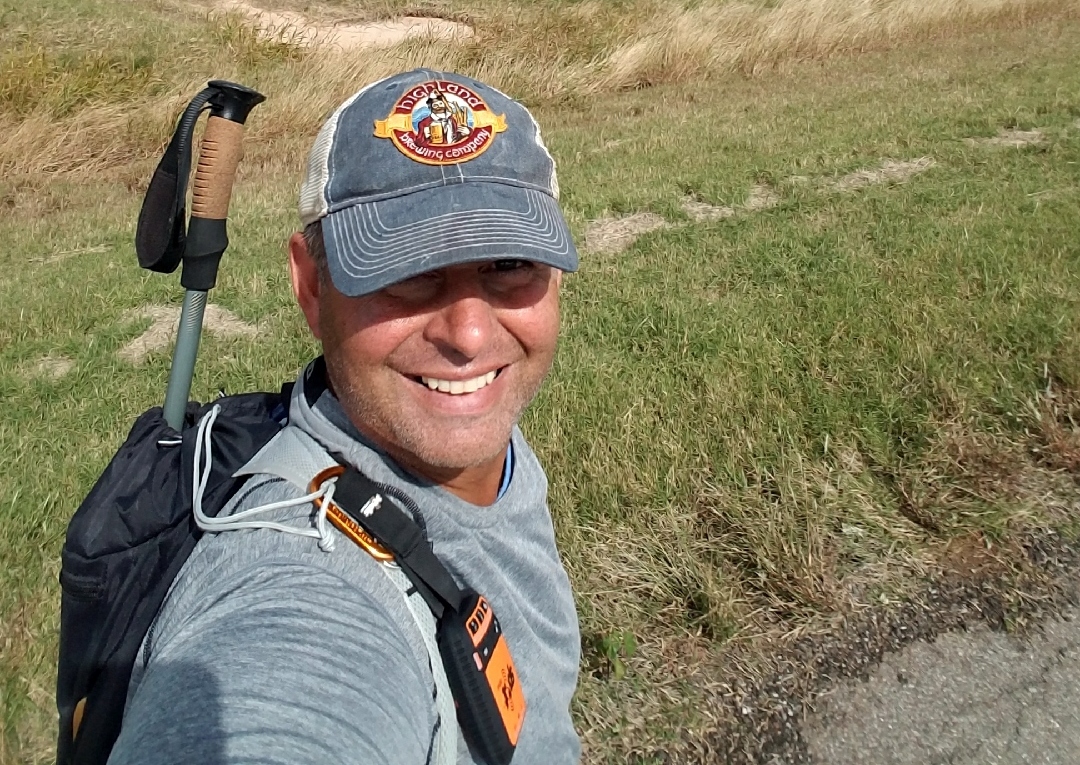 He used to patrol the streets. Now he’s walking them.

Tommy Dellinger, a Gastonia resident, served in law enforcement for over 21 years before having to retire due to Parkinson’s disease in 2013. Sixteen of those years he proudly served as a State Trooper in the North Carolina Highway Patrol.

But now he’s walking. One step at a time – across the country.

First it was billed as a hike. Then it became a trek. Many would call it an adventure. Tommy calls it a journey. The word “journey” fits. Because that’s what he’s been on – long before the “walking across the country” portion of the journey began.

Tommy was diagnosed with Parkinson’s disease in 2008 at the age of 40. However, in the case of most Parkinson’s patients, the symptoms had been prevalent five years earlier.

However, the time finally came where the Parkinson’s disease had progressed enough to where he couldn’t do his job anymore to the level he needed to.

That’s a tough pill to swallow for anyone. But even Tommy knew it, and couldn’t fight it anymore. So in 2013, he turned in his gun, his badge and his keys.

Sixteen years as a highway patrolman and all he had to show for his work were the 16 license plates that he still hangs proudly on the wall at home today.

However, when illness of any kind forces you to stop doing what you love, depression seems inevitable. After all, many of us define ourselves by our jobs.

Until we can’t anymore.

Research shows that engaging in a regular exercise program can really improve some of the symptoms of Parkinson’s disease. So earlier this year, Tommy decided to take the Parkinson’s unofficial slogan to heart – he would “just keep moving” – only this time, across America. Thanks to the Deep Brain Stimulation surgery he underwent earlier this year, he has given a new lease on life.

After all, he could still walk. So why not? So many Parkinson’s patients can’t even do that. Tommy decided he would walk and spread awareness to his personal journey and the journeys of so many others afflicted with this debilitating disease.

After discussing the plan with his doctors, family and others who have embarked on similar walks, he flew to California to give it a go.

His doctor gave him one important piece of advice – “listen to your body”.

Tommy’s been in constant communication with his body throughout this journey. He does what he can each day. Some days he gets all his steps in, and other days he may call one of his fellow officers for a ride into the next town.

After all, it’s not about the steps – it’s about the message. One of the big symptoms associated with Parkinson’s is rigidity – or muscle stiffness. Tommy experiences this at times on the right side of his body. Once he’s moving, he’s fine. But if he stops and relaxes for longer than 30 minutes, his muscles will tighten up.

Some days, he may even rest and not walk at all.

That’s the thing about a journey – it’s never easy but you always learn a few things along the way. Tommy’s no different.

Hard days are ahead. Even he knows that. But he’s learned so many things along the way in this journey.

One thing he was surprised to learn was much how much he’d miss his family. Walking by yourself, alone with your thoughts day after day can be tough. It has helped him really appreciate what an
important role his family has played and continues to play on this journey. But more than anything, he’s realized he’s a little tougher than he thought he was – something that will help him push through on the hard days that have yet to come.

However, this journey is bigger than him. It’s about finding a cure for what an estimated 7 to 10 million worldwide are suffering from each day.

Tommy continues to keep moving. One step at a time. One conversation at a time.

But when he arrives back home next year, his journey won’t be measured in steps taken or miles traveled. It will be measured in the number of people he touches along the way.

Follow and support Tommy Dellinger on his journey across the country by visiting our website at gastonalive.com/tommysjourney.