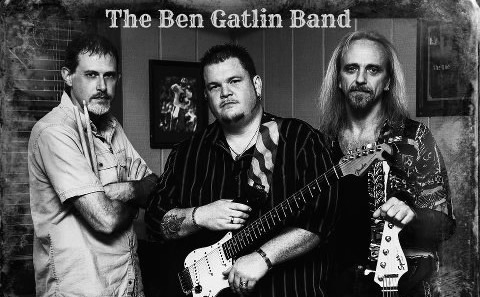 The life of the working musician can best be described as an odyssey for those who crave adventure at every turn. From the outside looking in, performing music for a living can seem glamorous and even easy but nothing could be further from the truth. Filled with both opportunity and peril, making ones living primarily from music will test your courage and dedication on a daily basis.
The Ben Gatlin Band is made up of three hearty souls who exemplify the term ‘working musician’. Ben Gatlin, David Benoy and Paul Gibson are musical brothers who perform weekly not only for the paycheck, but for the joy of music itself. The chemistry these three musicians bring forth on stage is readily apparent from the first note of every show to the last.

Band leader, guitarist and vocalist Ben Gatlin began his musical journey, as most musicians do, at a very young age. Church provided the foundation for this journey which soon led to a world of discovery. After an early stint with the drums he found interest in school band where he became further skilled in reading, theory and performing. Ben credits his brother Darren with eventually inspiring him to sing and play guitar …”He always got the weirdest but coolest sounds out of his guitar” Ben says. A rock band soon followed and Ben’s path was laid out before him. There is simply not enough space in this context to list all of his mentors, inspirations and collaborators but suffice it to say Ben is extremely grateful to all those who shaped and molded his musical persona. Ben states quite simply and powerfully “I’m forever grateful and I love you all!”.

Drummer and harmony vocalist David Benoy, a Gastonia native, inherited his love for music from his parents who were both college music majors and performers. Like Ben, David has spent time on the local scene honing his chops and staying involved with the musical community. Being equally skilled on both the drums as well as the keyboards has allowed him to be much in demand. From house gigs at the Frontier in Gastonia and Coyote Joe’s in Charlotte to all points in-between, David’s resume allows him the credentials to stay working on a consistent basis. He met Ben at an impromptu jam where fate took control and led to the roots of the Ben Gatlin Band.

Bassist and vocalist Paul Gibson began his professional career here in North Carolina in 1983 with ‘High Degree & the Mirrors Band’ as a vocalist and drummer. In 1986 he moved to bass guitar with the band ‘Sequence’ and then migrated to Charlotte a short time later in 1987. This began a busy and lengthy period which saw Paul play with three different house bands along with USO tours with Chris Cook & the Critters among other various bands and projects. Longtime friends, Ben coxed Paul out of a brief performing hiatus and convinced him that the final piece of the puzzle was there for the power trio he envisioned.

The Ben Gatlin’s Bands musical style defies categorization as influences from Soul, R & B, Motown, Funk, Country, Jazz, Blues and Rock all appear effortlessly. One look at the bands FaceBook page is all it takes to realize these guys put the ‘work’ in the term working musician. Ben enthusiastically comments that “Playing with Dave and Paul is something I’ve not had the pleasure of experiencing in any other band”. The Ben Gatlin Band is an epic musical voyage not to be missed.

A Passion For Dance