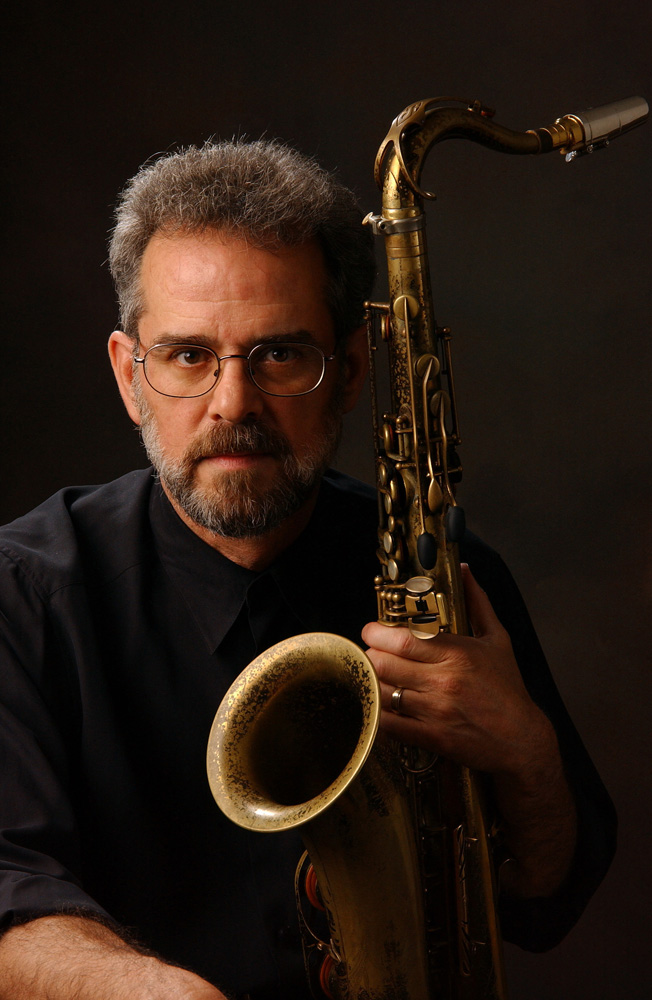 Late one evening quite a few moons ago I entered the door of the world famous Double Door Inn in Charlotte quite by chance. Greeted by the sound of twin saxophones soulfully harmonizing, I worked my way through the crowded room to witness the full effect of this groovin’ band and the horn section leading them. As the mass of bodies parted and my field of view became unobstructed, I realized there was but a lone sax player on the well worn stage before me. Masterfully playing both the alto and tenor saxes at same time was Gaston County musician, John Alexander.
Woodwind artist John Alexander is a native of Gastonia who garnered his music education at Erskine College in Due West, South Carolina, where he received a Bachelor of Arts degree in Music. John then joined up with Uncle Sam for tours of duty with the 282nd Army Band at Fort Jackson, SC, and the 8th Army Band in Seoul, South Korea. His next stop was the University of Miami where he was ultimately awarded a Master of Music degree in Jazz Pedagogy. John has put his education and military service to good use in the many classes and clinics for aspiring musicians he hosts regularly in our area to this day.
As a composer and arranger John has recorded two CD’s of his own original music – the 2001 release “You Need ‘Dis” and “Many Hands” which was released in 2011. John has lent these skills to the Charlotte Jazz Orchestra, of which he is a member, and has appeared as a guest artist on albums of other artist too numerous to mention. In addition to his composing and arranging talents, he is music director for ‘gtownsound’, which produced the DVD“Reunion 2011, A Rhythm & Blues Revival” featuring Gastonia bands from the 60’s and 70’s including The Counts, of which John is an original member.
John has performed with Ira Sullivan, Louis Bellson, Curtis Fuller, Gap Mangione, Matt “Guitar” Murphy, Jack Jones, Woody Herman, Eddis Higgins, Astrud Gilberto, The Spinners, The Four Tops, K.C. and the Sunshine Band, and Lou Rawls, Natalie Cole, among others. He has appeared at the Mammoth Jazz Festival, the North Carolina Jazz Showcase, Jazz Charlotte, the Charlotte Symphony and as season opener for the Gastonia Community Concerts Association. Highlights of John’s career include performing abroad in Okinawa, Japan in 1999 as a member of the Ron Brendle Quartet and as a member of a cultural delegation representing Gastonia at the annual spring festival in our sister city of Gotha, Germany in 2000.
Considered by those locally in the know to be one of the hardest working men in jazz, John continues to hone his craft and his chops weekly. He currently performs Thursdays from 8 – 11 pm at Blue Restaurant and Bar in Charlotte with Big Octave, every third Sunday from 4 – 6 pm at Delta’s in Charlotte with the Charlotte Jazz Orchestra and the occasional Saturday at Delta’s with Big Octave.
North Carolina seems to produce more than our fair share of notable sax players- John Coltrane, Lou Donaldson and Tina Brooks among them. John Alexander’s soulful sax is a musical treasure right here in our own back yard.
For more information about John Alexander and his music please visit

Summer Only Lasts A Season