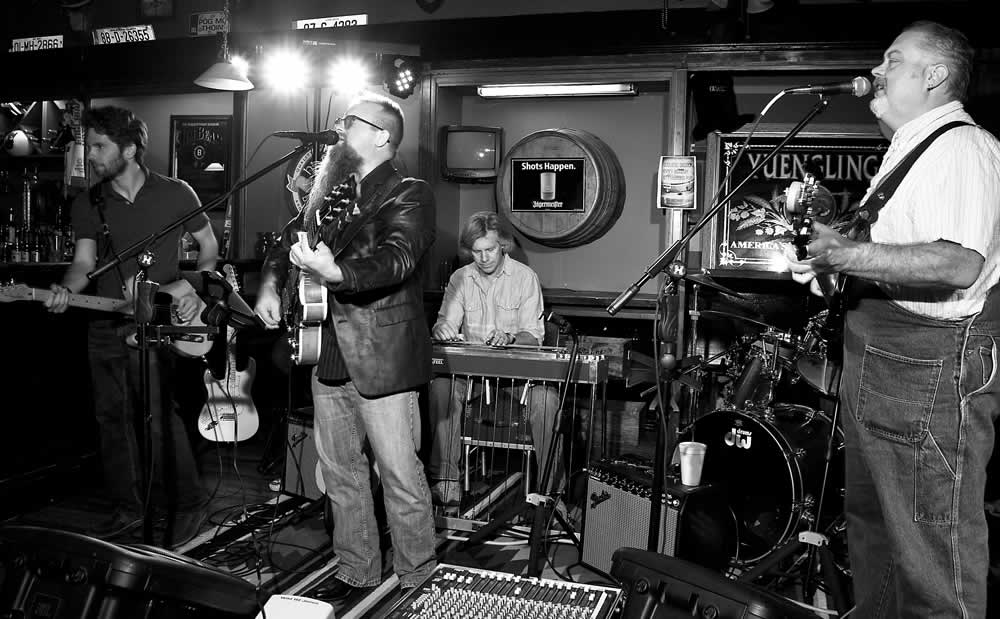 Jones is the brainchild behind Gaston County’s newest band, Stepside Deluxe. Even though they have been together for over a year now, they have just recently emerged from the rehearsal studio and are now out and about playing shows throughout Gaston County.

Even though they may be Gaston County based, it’s quite clear that their musical heart is firmly planted in southern California – Bakersfield to be exact. It’s no secret that Nashville, Tennessee is the home of country music. But like Sir Isaac Newton’s third law of motion stated that for every action, there is an equal and opposite reaction.

Nashville may be the home of country music, but in the 1950s, some folks in California were not feeling it. They were not a fan of the slick country sounds coming out of Nashville at that time. Thus, they created their own sound – the Bakersfield sound.

Buck Owens and Merle Haggard were the founding fathers of this sound. And as a result, the Bakersfield sound went on to inspire scores of impressionable musicians in that time including Gram Parsons (Flying Burrito Brothers), Jerry Garcia (The Grateful Dead), John Fogerty (Creedence Clearwater Revival) and more. They even inspired Jones, who has always had a soft spot in his heart for this musical movement. So it’s no surprise that his new band, Stepside Deluxe, has a Bakersfield flavor to it. Stepside Deluxe may be a new band with an old sound. But if the band has it their way, what is old will hopefully become new again – or at least new to you.

Their sound will resonate with people who are already fans of Buck Owens, Dwight Yoakam, Merle Haggard and Chris Isaak. It’s retro enough that the older crowd will dig it. It’s got enough twang to satisfy the country crowd and rocks enough to keep the rock n’ rollers happy. And it has a good steady beat that even the ladies that love to dance can get behind it.

Bil and his bandmates are having fun playing their music. And that’s their mission – to have fun and share this music with the masses.

Now I am no famous physicist, nor have I ever been granted knighthood by the Queen of England, but I do have my own law of motion. It says, if the music moves you, then you should dance. Especially when Stepside Deluxe is playing at a venue you near you.

Editors Note: We have enjoyed watching Stepside Deluxe grow from an idea that our friend Bil Jones had for a band, to the fun fusion of traditional rock and roll and traditional country that they are today…

GA!: Bil, first of all, why a band? I know you have a full-time job, run a small business, plus have a girlfriend…aren’t you busy enough?
Bil: Quite simply it’s the love of music which I believe drives all musicians. As most know it’s not the money!

GA!: I’ll have to say that you have some really great guys in the band. How do they add to the band chemistry?
Bil: Every member brings something unique and crucial to our sound. Robert Nesbit our guitarist is a longtime friend who I had wanted to do a project with for years. Potter was the bass player of the local band ‘Cottonmouth’ who I discovered had similar taste in music and as an added bonus sings great vocal harmonies. Jim Ashton is the most seasoned member of the group who is a multi-instrumentalist with a special talent for the pedal steel guitar. I’m really fortunate to be able to play music with some of the most talented and likeable musicians in the area.

GA!: If Stepside Deluxe was a mixed drink how would you describe it?
Bil: I would say we are a smooth blend of traditional country and roots rock with a splash of Bakersfield twang thrown in for kick!

GA!: You guys have a different sound but are tons of fun. You say you are not a cover band – what do you mean by that?
Bil: In addition to our own material we do songs by other artist in an
interpretive manner. In other words we’ll take a great song and put
our own spin on to give it our sound.

GA!: Who hires you – in other words what venues are you appropriate for?
Bil: We play a mix of festivals, corporate functions, private events, and restaurants along with our favorite – the honky tonks – really anywhere folks enjoy really good, honest music.

GA!: I know this has been a labor of love for about two years now…what are your ultimate goals for the band?
Bil: In addition to writing new material and playing regional events we would ultimately like to perform at some of the larger festivals such as MerleFest, SXSW Music Festival and the Americana Music Festival.

GA!: Where and when can we see you guys play? And how can we contact you if we need band for a function, festival, etc.?
Bil: Our next local shows will be at Rodi Med-American Grill on Friday July 27th from 8:00 pm – 10:00 pm (acoustic) and Freemans Pub on Saturday August 4th from 9:00 pm – until (full band). For bookings we can be reached by email at stepsidedeluxe (at) gmail (dot) com, by phone at 704.361.5453 or thru our facebook page at www.facebook.com/stepsidedeluxe .