McAdenville is know for many things, a charming downtown, spectacular Christmas lights, and soon it will also  be known for Jay McCosh’s new Thomas Kinkade Signature Gallery.  Located on Main Street in McCadenville, the new gallery is almost four times the size of his previous gallery which was also on Main Street. We talked with Jay inside his nicely appointed colorful tasteful, well lit gallery recently.

GA!: Jay, let’s start with you. Are you from McAdenville?

Jay:  No.  I grew up in Gastonia, then moved to Wilmington then NYC for a while working in the film industry.

GA! You have certainly had some interesting occupations-in the film industry, magazine publisher, Rocky Mountain Chocolate Factory franchisee; did I leave some out?

I think I was fortunate when I was younger to be able to try many of my interests in the hopes of finding out “What I want to be when I grow up”.  Not being able to totally settle on one thing I now work my two favorites: Rocky Mountain Chocolate Factory and the Thomas Kinkade gallery.

GA! You and your wife live in McAdenville. Why did you choose Christmastown?

Jay: We started looking a few years ago for the right place for us.  We knew we wanted a community that had great schools for our child and hopefully more to come.  Of course we both grew up coming to McAdenville every year to see the lights at Christmas, so when the opportunity came and our love of the Christmas season, it seemed everything came together perfectly with McAdenville.

GA! Love the new gallery-tell us about it…

Jay:  The Gallery started out in Carolina Place Mall in Pineville.  When the owner there retired I took it over and after another year there the mall informed us someone else was interested in our space.  So we needed to find a new place.  I always thought driving through McAdenville reminded me of one of Thom’s paintings.  And with us preparing to move here it seemed right and a place did open up.  The first place we had here in McAdenville was not even 500 sq feet.  Our new space which is now only 2 doors up from our previous location is almost 4 times as large.  We are very excited to offer collectors a proper viewing room and a wider selection of paintings to view.

GA!: How did you first become interested in Thomas Kinkade? Jay:  I have always liked his work and when he released “The Light of Freedom” in honor of 9/11, I realized it was time to buy my firstpiece.

GA!: Why do you think there is such interest in Kinkade’s work-there are a lot ofartists out there?

Jay: Artwork must speak to you and in many cases when you find the right piece it will cause you to have an emotional reaction.  Thom’s work speak to many because he paints images that were in a simpler time, “when life was good”.  And that can mean many things to many people.  He is the painter of light and the lighting effects in his paintings are sometimes incredible.  He also hides many things in the paintings which make them fun.  Also, he has a vast array of subjects:  Cabins, Lighthouses, Cottages, Chapels, Disney, Sporting events, such as Yankee Stadium and the Daytona 500.

GA! What special events do you plan to have in your gallery?

Jay:  We plan to have 2 Master Highlighting Events this year where an artist trained by Thoms will add additional paint to your canvas highlighting areas that are special to you bringing the painting more to life.  One will be with Thom’s brother Patrick in December.  The other will be sometime in the fall.

GA!: The Disney pieces are a lot of fun. Tell us about those.

Jay:   Thom started painting Disney in 2005 with the release of “Disneyland, 50th Anniversary”.  Since then he has release seven others including his latest release “Bambi’s First Year”.  These have been very popular i n fact “Tinkerbell and Peter Pan Fly to Neverland” now holds the record for fastest sell-out of Kinkade painting in history, selling out in just 8 hours.  Most people want to get the entire set of Disney Paintings, by getting the same limited edition certificate number for each one.  There will be one more princess painting out this fall, (and if you can keep a secret, rumor has it might be “Beauty and the Beast”, but we must keep that between you and me).

GA! What if I am interested in Thomas Kinkade, in particularly the Disney series, but don’t know much about art. Can you help me get started?

Jay:  Of course.  There are two Disney Series to choose from.  The “Disney Dreams” Collection includes the more classic stories, such as Snow White, Pinocchio, Cinderella, Peter Pan and Tinkerbell and now Bambi.  There will be a total of 12 in this series.  Bambi is the 5th one in this collection.  There will be another one out this year and 2 more each year until 2013.  The other Disney collection is called the “Disney Discoveries” Collection, which includes more recent films.  The first one in this series is “The Princess and the Frog”.  The second on in this series will be out this year and is rumored to be either “The Lion King” or “Pirates of the Caribbean”.

GA! I think you told us that you have everything from small Kinkade gift items, to the most sought after, hard to find collectible pieces. (something for every budget?)

Jay:  Thom’s feels art is for everyone and should not be limited to just the Bills Gates’ of the world.  We have puzzles, calendars, nightlights and small framed artwork starting at just $14.99.

GA! What is the most interesting thing that has happened since you have owned the gallery?

Jay: We had an event with Thom at the Biltmore House when he unveiled “Elegant Evening at Biltmore”.  We were on the south terrace right next to the house under a huge tent.  It was amazing to host a party at the Vanderbilt’s place. 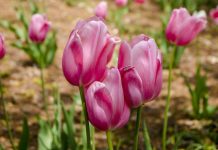 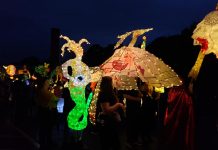